Yesterday Eric decided it was time to harvest some honey from the four bee hives that he keeps.  He picked up a two frame honey extractor and all of the other miscellaneous equipment needed.  It’s a bit of an investment but amortized other the years it will pay off. Eric just started beekeeping last year with only one hive and didn’t get much honey from it.  This year he upped his game and has three.  One hive is from a captured swarm in July so we don’t expect to get any honey from that one this year.  One of the other hives has been to say it mildly, crazy… it already has three honey supers on it while the other two only have one each.  Eric obviously chose to harvest the hive with the three supers. 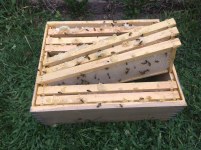 Upon inspection of the frames he found that about eighteen frames had capped honey.  He gently bushed the bees off of the frames and swapped them with empty ones.  Since Eric is rather new to this, he readily admits that mistakes were made and lessons to be learned.

First lesson don’t extract the honey where the bees can find you… He had set up his honey extractor in the garage which is on the other side of our house from the bees.  Everything appeared to  be going well but soon after starting the bees found him.  When I peeked out there to see how things were going he was completely swarmed by bees, thousands of them.  The sad thing about this is all of the bees that drown in the honey while trying to eat it.  Next time he says that he’s going to set up his equipment in the sun room and keep it well shut so that he doesn’t have to deal with the bees.

All said he got about four and a half gallons of honey from those eighteen frames.  Unfortunately he also has a small bucket of a mixture of wax and dead bees.  He is going to let all of the equipment sit out by the hives so that the bees can clean it all off for him and then try to recover the wax for me to make candles.  So it was a good harvest of honey and probably in the coming weeks he’ll extract honey from the other two hives.  He wants to have everything extracted before September so that he can prepare to get them ready for the winter.  That will be the topic of another blog post. 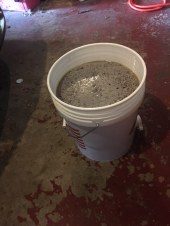 Welcome to our blog! I am the mother of 3 children. I have a son and daughter in college. My daughter, Maeghan, is my partner on this endeavor. View all posts by Heather Bartlett

Vet time
Vegan Hamburger Mac and Cheese.
Returned to my alma mater today for show choir. First time I had been back in 30 years🤦‍♀️. I found the location of my locker. A lot has changed, but a lot is the same.
Sisters

Own less. Live more. Finding minimalism in a world of consumerism.

A WOMAN ARMED WITH ANCESTRAL WISDOM IS AN UNSTOPPABLE FORCE!