It is going to be really cold in my neck of the woods over the next week.  We are looking at highs that will be below 0 degrees, without wind chill.  I spent the day busy in the kitchen cooking and baking in attempt to keep the house warm without forcing the furnace to run constantly.

I made scones, brownies, banana bread, lentil soup, cranberry sauce, bread and quiche.  The quiche will be tonight’s dinner.  I am dreading this evening, I will need to brave the cold and go to a meeting tonight.

1 cup cheese (I used cheddar, but you could use any cheese you want)

salt and pepper to taste

pie crust (I use premade, I have yet to be successful making a pie crust)

Preheat oven to 350.  Put crust in pie pan.  If using fresh broccoli, boil for 4-5 minutes.  When broccoli is done, chop.  Whisk together eggs and milk.  Add cheese and broccoli.  Pour in pie pan and bake for 40 minutes or until knife inserted in middle comes out clean.

I will serve with a salad and crusty bread.  Bon appetit! 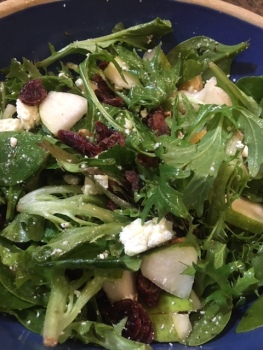 Winter is a terrible time for salads with tomatoes, cucumbers and other summer toppings.  My winter mixed green salad uses toppings that are more seasonal.

Artichoke Spinach Dip is the perfect appetizer for a potluck dinner or party.  I made it for a surprise birthday party that was given for my daughter over the weekend.  This is a favorite dish and was a big hit.

Mix all ingredients together and pour into baking dish. Sprinkle parmesan cheese on top.  Bake in oven for 30 minutes or until bubbly. 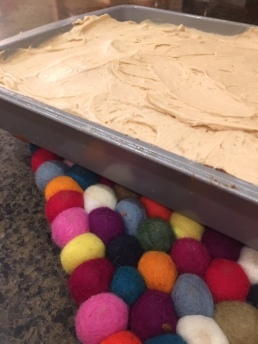 My daughter’s favorite cake is banana with a peanut butter frosting.  I use bananas that are passed their prime, which I keep in the freezer until ready for use.  This recipe is really simple and delicious.

Mix the butter and peanut butter until creamy.  Add the powdered sugar and mix on low until combined.  Stir in vanilla.  Add milk until you get desired consistency.  Spread on cake.

We get our seafood from Sitka Salmon Shares.  It is a CSA for seafood that is available in the Midwest.  This company uses sustainable practices and is environmentally friendly. Once a month from May to December we get a box of really good seafood.  This year we received salmon, cod, bass, tuna and prawns.  We eat it once a week and I think we might have enough left to get us through March.  We will be signing up again this year.

Tonight I made Miso Glazed Salmon with rice and sugar snap peas on the side.

Preheat the oven to 500 degrees.  Mix miso, sugar vinegar and water.  When oven is 500 degrees, turn the oven down to 200, put the glaze on the salmon and bake.

I cook my seafood in a high temperature oven and then turn down and let the heat cook the fish slowly.  It take about 30 minutes, but the fish always turns out perfectly and not overcooked. 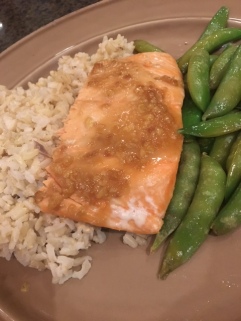 I make a lot of my own cleaning supplies.  Saving money is a big reason why I choose to make my own.  But, an even bigger reason is our health.  So many store-bought cleaning supplies are filled with toxic chemicals that I personally don’t believe are good for the health of my family.  For this reason, we go the homemade route as much as possible.  It also means we put less plastic into our ecosystem, which is obviously better for all of us.

This recipe is for the window cleaner we use.  It costs pennies to make and smells great.  Quick side note, that bottle of Dr. Bronner’s is 18 years old.  We have been recycling it since the year 2001.  We buy it by the gallon and continue to refill that bottle.  In 18 years, we have only purchased 3 gallons.

The directions are pretty straightforward.  Add all ingredients to a bottle and mix.

You can use any essential oil of your choice.  I just prefer the lemon lavender mix.

These are the cookies that I made, and they are so good.

Here is the recipe: http://bakingaway.blogspot.com/2009/10/chewy-sugar-cookies.html

I have added a new side dish to my dinner rotation.  Baked Creamy Polenta.  I purchase the polenta in bulk at my local health food store.  It has always been a favorite of mine, but it always seemed daunting cook from scratch.  When I made it, I used the premade polenta in the tubes, that always has the texture of rubber.  This recipe is a winner and very easy to make.

salt and pepper to taste

Bring 6 cups salted water to a boil.. Whisking constantly, slowly add the polenta and reduce heat to medium-low. Whisk often, until polenta is tender. If the polenta becomes  thick too soon,  add more water and continue cooking. Add butter and ½ cup Parmesan to polenta and stir.

Add to baking dish, cover with additional parmesan cheese and bake in 350 degree of 20 minutes.

Today I spent the day with my middle child,  Hannah, to celebrate her 20th birthday.  Her actual birthday is on Sunday, but we wanted to take a day for manicures, lunch and shopping.

Hannah has had a tough year.  In April she was diagnosed with Grave’s disease.  The last 9 months were filled with doctors appointments, labs and experimenting with a wide array of prescriptions and doses.  She was a trooper, rarely complained and completed 2 successful semesters in college while feeling pretty crappy. In all honesty, she dealt with the situation much better than I did.  As a parent, it is so hard to see your child struggle.  Her symptoms seemed to come out of nowhere.  It started with the a phone call from her at school saying “I need to go to the ER” and ending with a life changing diagnosis.

Because her heart symptoms were severe, she underwent radioactive iodine on January 2 to “kill” her thyroid.  Once she enters hypothyroidism, which will be a life long diagnosis, she will go on Synthroid.  It sounds extreme, but in her case, it was the only choice.   The radioactive iodine lead to 5 days of isolation because she was literally radioactive.  Since the thyroid absorbs the radiation, for her to be around other people would have put their thyroid at risk.  Again, she dealt with it like a trooper, rarely complained and just asked for food on a very regular basis!  To prepare for the treatment, she had to eat a low iodine diet for 3 weeks which eliminated cheese from her diet.  As a Wisconsin girl, cheese is very important.

She was released from isolation earlier this week.  She spent her time packing up to go back to college, spending time with her boyfriend and spending time with us.  We ended the week by celebrating her birthday, which felt like a perfect reward for enduring a long 9 months. 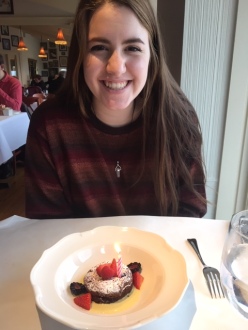 My girl enjoying a birthday cake.

I am in a lot of Facebook groups that focus on frugal living, non consumerism, hygge and housekeeping.  Since January 1, it seems like the main topic of conversation in all of those groups is the Netflix show about organizing your life and getting rid of your stuff.  I feel like the only person on the planet who has not watched it yet.  I refuse to watch it at this point out of principle.  I have enough guilt, I don’t need somebody telling me that getting rid all of my stuff will make me happy, I am very happy as it is.  As with all things in life, moderation is key, even minimalism.  It feels like another trend that will lose its steam and something else will take it’s place.

Instead, I am choosing to just let life lead me where it will.  Keeping my to do list short and attainable and allowing myself to savor the season of winter with its promise of coziness and warmth.  It’s a cold night out there tonight and I plan on ending this day, in my unorganized room, reading a book.  Tomorrow is always another day.

A family, travel and lifestyle blog