Reading is without a doubt my favorite hobby.  I can spend hours with a book in hand, ignoring the world around me.  I have been like this since childhood.  I remember many nights when I was supposed to be studying for a test and instead, I was quietly reading.  My tests grades were often a reflection of my lack of preparation, but I did not care if I was in the middle of a good book.  In fact, 7th grade earth science really took a hit when I was 12.  So far, I have read 110 in books in 2019.  I will likely add 1 or 2 more to that total, but I feel confident in my 2019 favorites and doubt that I will add to that this list.  My list is not in any particular order, I had too many to consider favorites.

That is my list, I could have gone on.  I know that there are at least 5 more books that I could have added as favorites, but it needs to end somewhere.  I am really looking forward to what 2020 has to offer in the way of new books.

We had some wins in the area of frugality this week.  With it being less than one week until Christmas, I am very proud of myself with the amount of money we have been able to save.  This year, I had all of my Christmas shopping and most of my wrapping done before Thanksgiving.  That was very intentional, as I wanted to actually enjoy the season this year instead of being stressed.  Here is my list:

I try to purchase the annual Human Rights Campaign ornament every year.  Here is 2019. 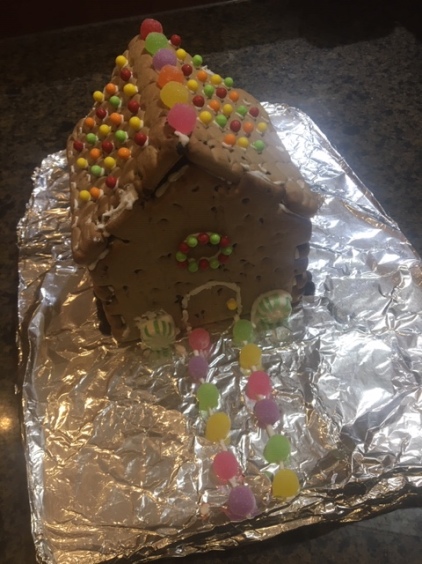 These little houses always turn out so cute

I am going to write a bit off topic today.  If politics triggers you, it would probably be best to skip what I am writing today.

My husband and I went to a funeral this last weekend.  An extended family member went to a local gun store, purchased a handgun and was able to walk out of the store.  Within a couple hours, this person was gone.  There are far more questions than answers as to why this decision was made.  Honestly, I did not know this person well enough to even venture a guess.  But the fact remains that this kind of death, no matter how close you are to victim doesn’t matter.  The outcome is heartbreaking and those left behind will never truly get over such a loss.

The state of Wisconsin does not have a waiting period when purchasing a firearm.  That safety measure was eliminated in 2015.  Why?  I have no idea.  But I would guess that the NRA donations to the powers that be in Madison had a lot to do with it.  With that single stroke of the pen, hundreds, thousands of lives have been impacted.  You have to wonder what a 48 hour wait would have done in this situation.  All of us know how a single incident can be so all consuming that you cannot possibly believe that you will get over it or feel better.  But, a good night sleep and time to think and reflect can make a big difference.  I myself cannot count the number of times I have gone to bed thinking that something was the absolute end of the world, only to wake up the next morning and think I can get through this.  Or in retrospect, it wasn’t that bad.  Waiting periods allow for that time of reflection, to cool off and realize there is another answer.

I am not interested in debating the 2nd amendment with anyone.  The fact of the matter is that as long as it is in the US Constitution, people in this country have the right to own firearms.  But that doesn’t mean that common sense can’t be applied.  Waiting periods and background checks need to be a part of the process of buying a firearm.  It makes absolutely no sense that purchasing a firearm is as simple as walking into a store and walking out with something that has the power to kill.  Yes, I am aware that there are thousands of products that also have the power to kill as well.  But as far as I know, nothing else has the shear force of a firearm.

The day before the funeral was December 14th.  That day was the 7th anniversary of  Sandy Hook.  This was the second deadliest school shooting in US history.  On that day 20 first graders were murdered in their classroom along with 6 adults.   The perpetrator of that mass murder was a mentally ill individual who had firearms purchased for him by his mother.   I remember thinking that this incident will finally bring meaningful change to gun laws in this country.  Seven years later, we are still waiting for the politicians in  Washington D.C. to put people over their donations from the NRA.

I respect people’s right to own guns.  I live in a state where hunting is an important part of our culture.  I myself have never hunted but that doesn’t mean that I am opposed to hunting or think that it should be eliminated.  I also understand why people want a handgun for protection.  These are rights that we have and in all honesty are not going anywhere.  I have accepted that as our reality in this country.  That set aside does not change the fact that we need some serious reform to protect everyone.

Saturday morning I woke up a little later than usual, around 7:15.  I was ready for a morning full of errands to prepare for friends we were having for dinner that evening.  But, first, I needed coffee.  It was then that I noticed my 17 year old daughter was also ready for the day, which was most unusual given that she is a teenager.  Teenagers like to sleep in on weekends.  My husband told me that they were going to Fleet Farm to purchase chicken food.  He had promised to take Maeghan to Aldi for chocolate if she came with.  What?  Honestly, that was the craziest thing I had ever heard.  Aldi’s chocolate is just not that good.   I asked why he felt the need to drag her out of the house for chicken feed and told her she didn’t have to go with.  She insisted, I rolled my eyes and said ok.  Truth be told, I was looking forward to a Saturday morning coffee in peace.

I went about my morning.  Showered, ate breakfast and then started to clean a little bit.  Eric had to take my car for this strange errand, so I needed to wait for him to do my own.  It was at about 10:00 am when I started to vacuum that they returned.  Thankfully, I resisted to the urge to comment that it should not take 3 hours to find chicken feed.  Because when Maeghan walked in behind him, she was holding this little girl.  If you look at the bottom, you can see the eyes of our very confused beagle trying figure out what the hell just happened to her perfectly balanced world.

Meet Sadie.  She is the last of our three dogs.  She was an early Christmas present for me. But it is clear that my husband is just as smitten as the rest of us.  We now have 2 golden retrievers (a strange dream I have had since childhood) and a crazy beagle.  Gift giving will not be necessary for me now for several years, as this is all I have wanted.  It’s funny because I brought it up on Friday night and my husband’s no was so firm that I thought, I better not bring it up again.  Honestly, I had no idea that this was in the works.

The whole family, their significant others, coworkers and classmates all knew that I was going to be given a puppy for Christmas.  Not once in all those weeks of careful planning did they let the secret out.  I am a very lucky woman to have such a loving husband and family.

A family, travel and lifestyle blog